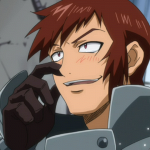 147 Edits since joining this wiki
August 20, 2011
Hello everyone! Welcome to my page, I'm most commonly known as William with a few variations to my name and such. I'm usually active and I hope to work with a lot of people to make this wikia big. Although, hopefully the cast will expand and such, so we can have more articles to write about!!

Enigma is my second favourite manga after Cage of Eden. Enigma has kept me on the edge, the history, the concept, I have began to love the manga!! I wish it the best and if Viz or whatever picks it up, I would immediately buy each and all the volumes in English.

Now going onto my favourite characters... I'm sure most of them will find the three odd, but I'll just limit my amount of favourites to three for now.

So those are my top three characters! Although, Mao Nanafushi is slowly climbing the ranks of awesomeness! I have to wait for her to develop more, though I'm sure she or Akame will be the first characters off the train.

Retrieved from "https://enigma.fandom.com/wiki/User:Pervisum?oldid=6035"
Community content is available under CC-BY-SA unless otherwise noted.